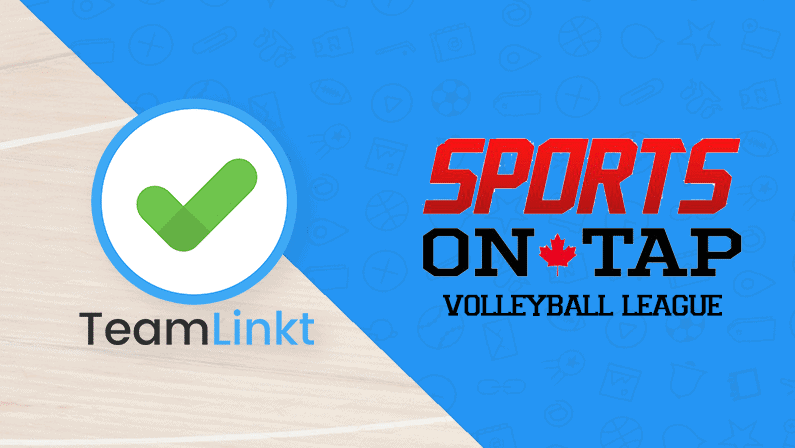 Sports on Tap is a sports bar in Saskatoon, Saskatchewan that operates a volleyball league with over 300 teams each season. The facility has 7 volleyball courts and offers an awesome atmosphere for competitive and rec volleyball teams to compete in during the summer.

Sports on Tap was able to save time and energy with the setup of their season, as well as time throughout the season by using the TeamLinkt league management tools. In addition, teams were able to use a team management app for communication within their team, as well as to receive important messages from the league.

Here is how Sports On Tap’s Volleyball League used TeamLinkt’s league management tools for the 2019 and 2020 seasons:

After team captains registered at the Sports On Tap facility for the season, the captains name, email address and team name were loaded into the TeamLinkt system and assigned to the correct division. From there, email invites were sent out to each captain to use the team management app.

Team captains were able to simply generate a team join code and share the code with their team. Team members could then download the app, type in the code and were auto-connected to their team in the app.

Sports on Tap uses their own third-party website for their league. TeamLinkt auto-generates a website leagues are able to use, however it is not mandatory with the system. Sports on Tap was able to embed TeamLinkt’s Standings, Schedule and Scores iFrames into their own website.

In 2020 Sports on Tap required team captains to register their team on-site at their facility.

Sports on Tap worked with a TeamLinkt onboarding specialist to create their league schedules through TeamLinkt’s Schedule Builder tool. The tools allows the league to enter in the dates & times their courts are available and auto-generates a schedule. From there, further customization can be made to perfectly tailor your league schedule to all of your scheduling needs.

Once the schedule was built, any change made to the schedule was automatically updated for the team in the team management app, and teams were notified of the change. This included date/time changes and even cancellations of games.

TeamLinkt also offers a schedule builder tool for games, and allows for importing events from an excel spreadsheet.

TeamLinkt’s league management software works perfect for leagues and associations of all sizes. Teams also love using the team management app as it is the perfect way to keep your team in the loop and organized during the season. As you can tell by the information above, TeamLinkt’s system is very flexible, and offering the team management app to all teams can be done very easily regardless of how your registration process took place, what you use to power your website, and how you schedule your games. Also, regardless of the size of your organization, TeamLinkt is available for free (here’s why).

If you are looking to set up your league or association with TeamLinkt, create an account here!